How to make your Album art take on a life of its own. (Mobile Music Factory)

Hello,
I hope the sun is shining on you wherever you are.

I recently have been putting together art for my lasted Album release Honey Dipped. This is my second album release that I've put on iTunes, but the first full band recording I've done. The art for the last Album Zeus's Woodshed  was done by me as well. With this album I'm touring a lot more and I'll be selling Honey Dipped were ever I go. So I had this Idea to give the album art itself a little more depth by adding concept.  Let me explain. 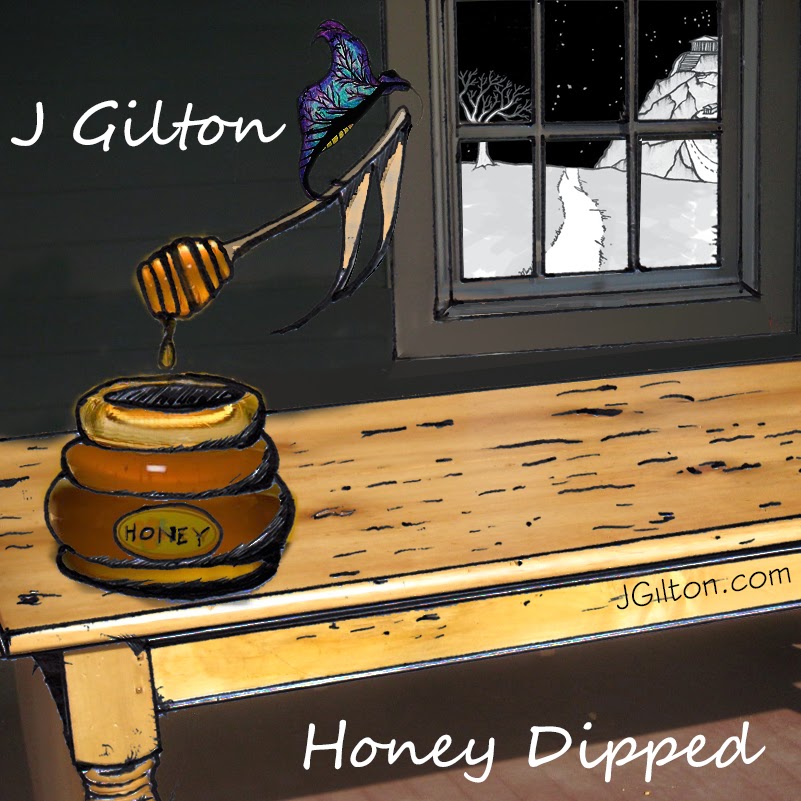 This is a working draft, I might change the honey spoon to resemble a musical note better.

As I go on tour, for the city's I play shows in I am going to place a post card from that city on the table. In this way as I sell these albums moving on down the highway adding postcards as I go, they reflect the journey I am on. This gives the art itself life. As if the table in the picture is home and I'm sending the postcards back there as I'm on my journey. I make each of these Cd's by hand the same as the Album art. So each time I make a set of them it will be it's own unique printing, and I sign and date each batch I produce, 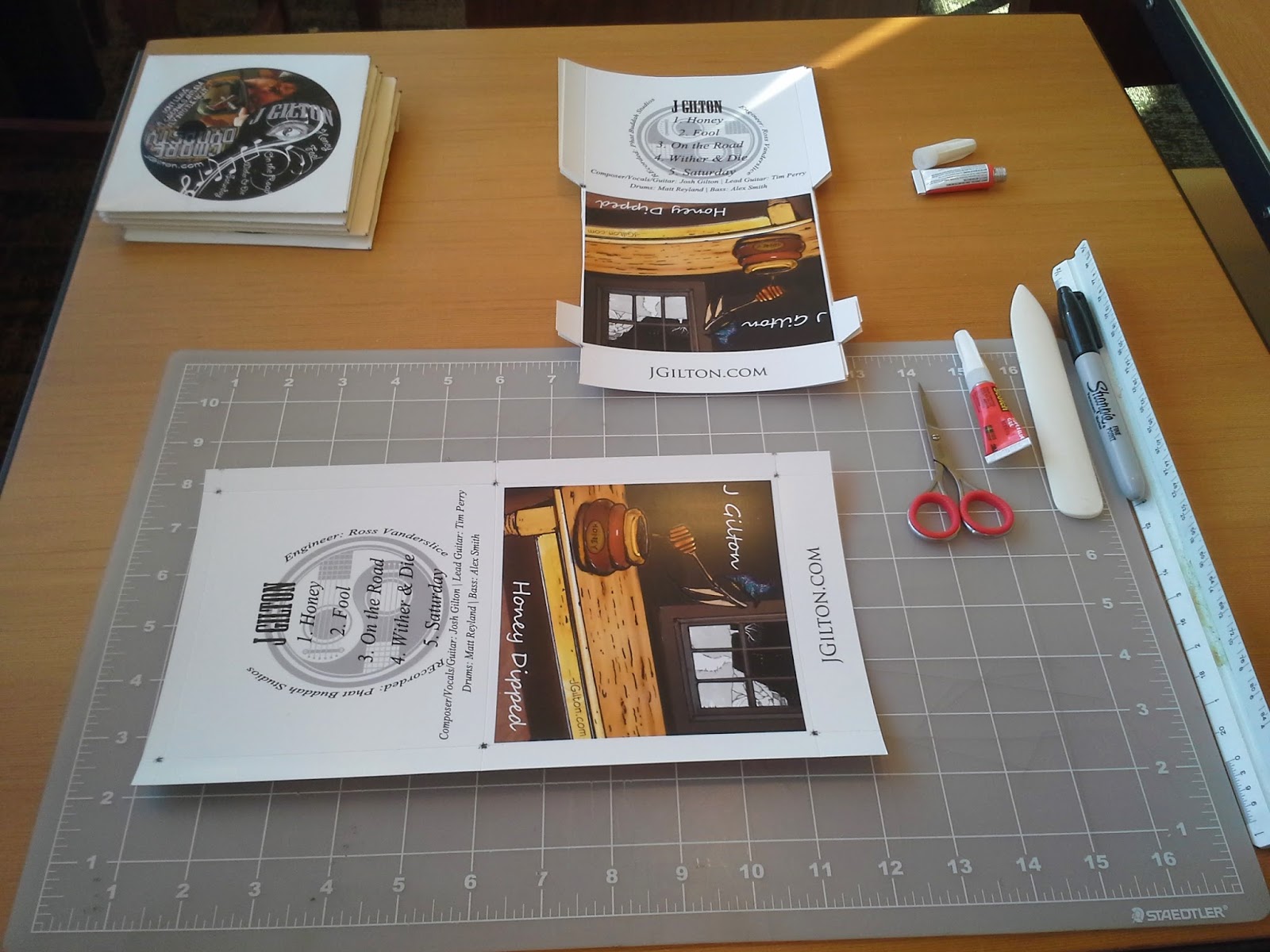 these are being made at a Panera Bread co.
(I will post a blog about producing CD's in small affordable batches later as a chapter in the Mobile Music Factory including templates to use.)

People in each city will see there home town postcards or neighbors on the album and feel more of a connection to the art and hopefully the music. What I truly like about this concept is that it has life because the growing postcards will display a proof of history on the table. Showing that things have happened and are still happening. 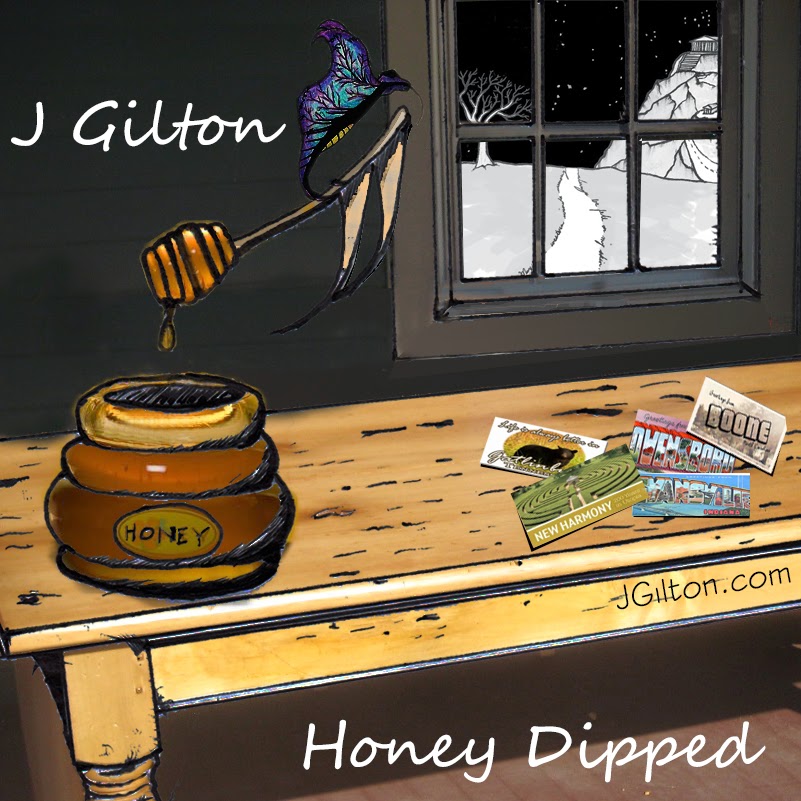 But wait there is more, I like art that has multiple layers to it. Outside the Window is my last albums art for Zues's Woodshed 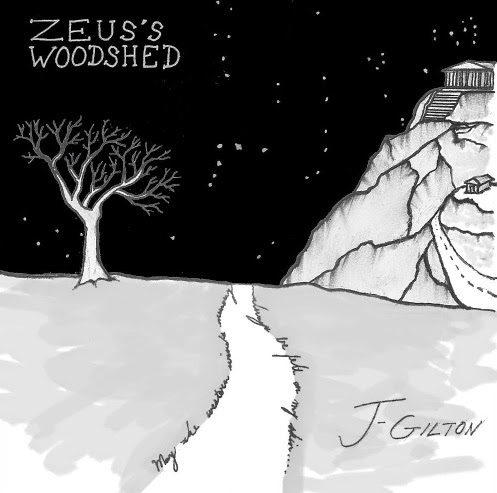 As the background in the new art it takes on several representations itself by holding visual information. Its represents the outside world as black and white were everything is yes and no, right or wrong with plenty of the grey areas between what defines were the edge is. The formidable mountain is displaying a sense of grandeur by looming in the distance . The road outside the window is leading away over the horizon. The lines of the road are actually made of a sentence in cursive. It say "May the western winds memory always be felt upon my skin...." You then see a road on the smaller mountain with a small building and stairs to the temple on the big mountain giving a sense of a destination. The tree is bare and shows the sign of the season giving the viewer an idea of what time in the year it is. Then you have the night sky in the back ground showing consolations in the sky. Orion the hunter is predominant in the sky giving a metaphor of hunting for what you desire in the outside world. This is subtle and won't be noticed by most people, maybe only those familiar with the stars. They might also then have the knowledge that Orion is to the West in the Fall and Winter when it comes over the horizon at night. This will give the picture and actual idea of direction.  All these visual cues are waiting to be discovered by the curious viewer.

When I was submitting the Album art to Itunes/CD Baby I came across an "opportunity". The Art needed to be 1400 pixels and my art was only at 800 pixels. This is a pretty big difference in size so  what I did is added a frame to it. This opportunity gives me the ability to put the art in the background of later albums by just adding a framed picture somewhere. 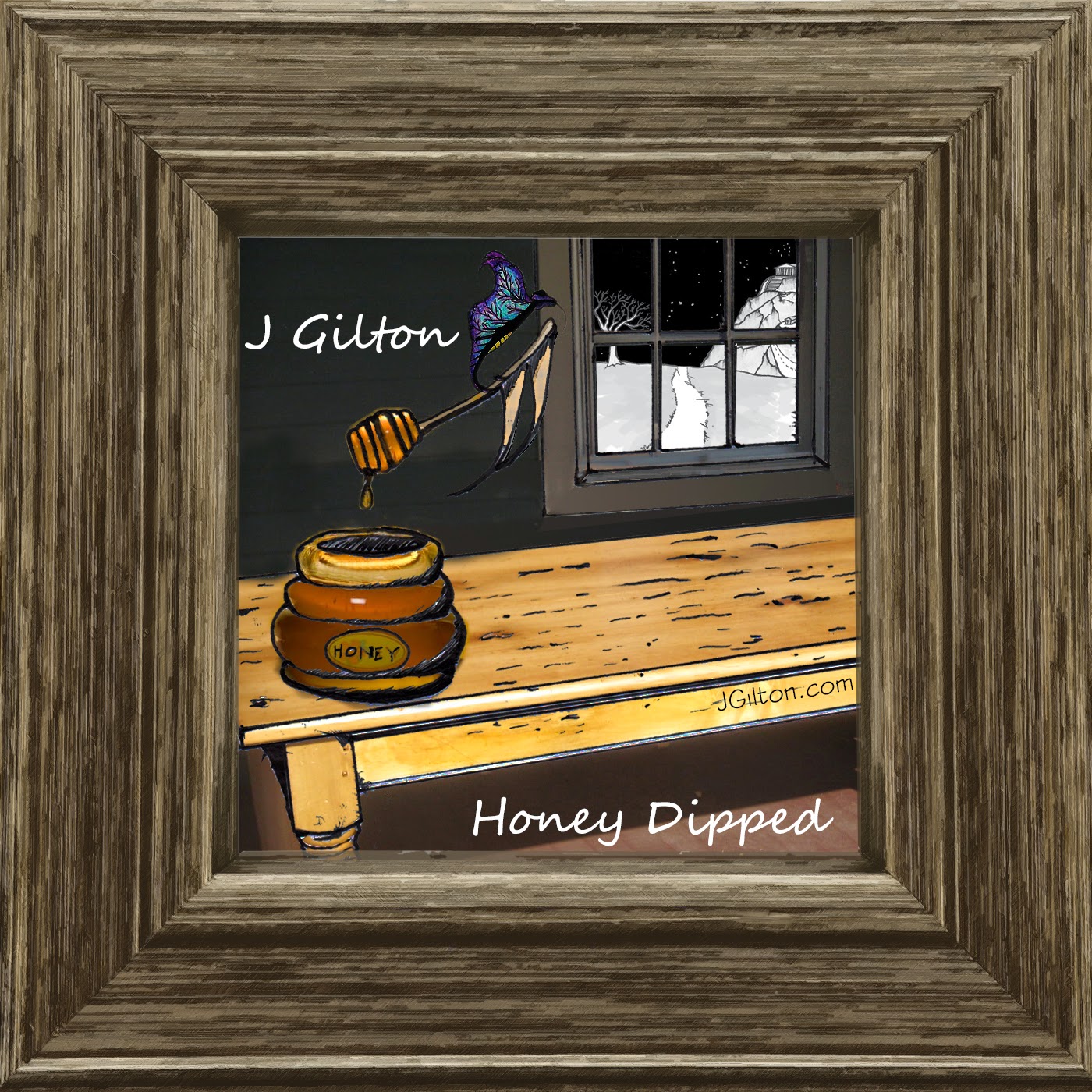 But wait there's more, The tiny Dragon holding the honey spoon, or as I like to call it a DragonFly, is is another concept in itself.  I have a outside of the box advertising campaign that  will involve Geocaching. If you don't know what geocaching is its a global scavenger hunt using GPS coordinates. When I'm on tour I like to go hiking on the off days. The concept for the campaign is to mark special places with my geocache marker which is a dragonfly made out of colorful wire (cat-5 data wire or telephone wire have lots of colors to pick from). This wire Dragonfly will mark the location for a log book container that I will leave free download cards inside of. Leaving things with the log books is a custom for those that participate, they leave something and take something. On the laminated Tongue of the dragonfly is JGilton.com. This will speak to the curiosity of people, especially a few miles deep in the woods at the end of a sweet trail, or a hidden away area in a popular city park. This concept is really Advertising for a tiny niche of people and will most likely be discovered by those who are not looking for it. However, I think its cool and defiantly unique. 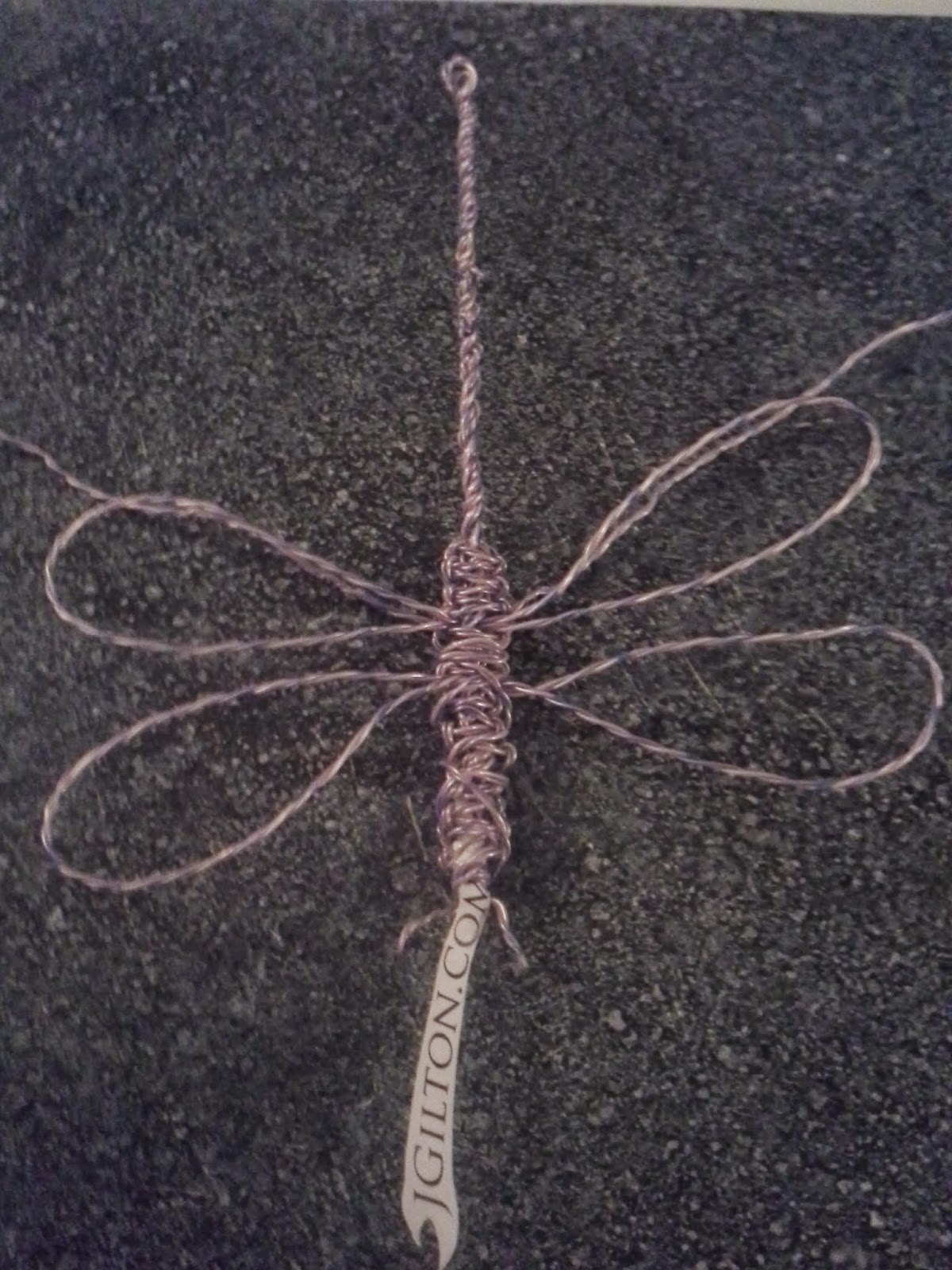 I also am planning to use this concept as a type of logo, and a recurring underlying theme or mascot through out my albums and promotion materials. The logo below is a base concept. I plan to make it resemble a dragon more but keep the shape of a dragonfly. 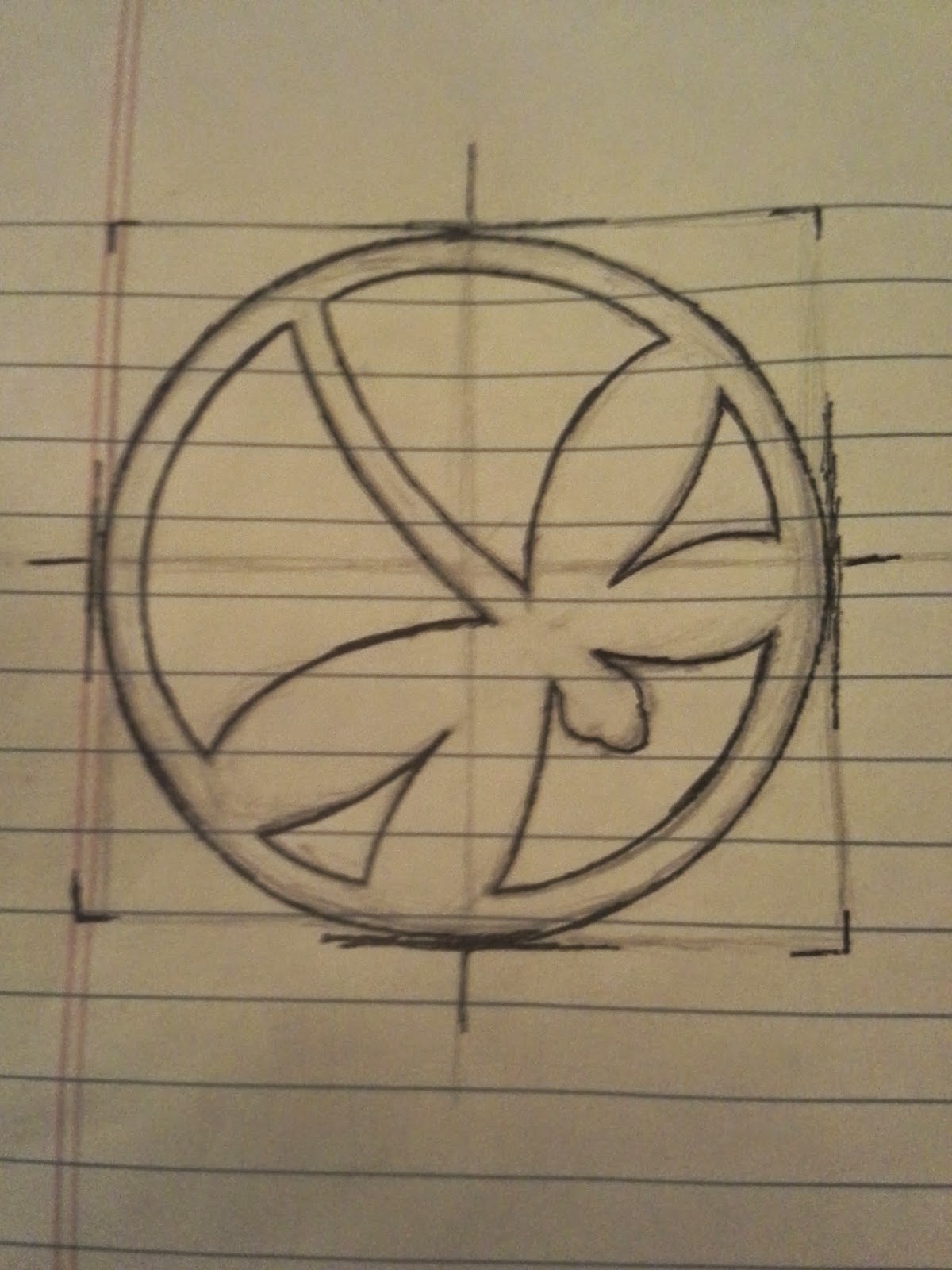 So as you might be able to tell at this point, I like to put a lot of thought in the things I do. The reason for that is to reward those who like to look a little deeper into things. I'm guilty of taking a long look at creative efforts to see if anything is beneath the surface. If someone feels like looking into something I've created, then I want there to be something for them to see. There is a effect of showing a depth to your art that it gives enough space for people to add there own meanings to it.  In this way they can have a special connection to you and your music that you could of never imagined when producing it.

To some people this can seem to be more effort then what its worth. The question is what its worth to you. To me its worth creating the best that I can with what I have the ability to imagine. In the world me live in today the things that attract peoples attention are the things that are outside of the box. On average peoples attention span has been shaped by the instant gratification we are use to. We don't like waiting for anything, and patience is now a even more valuable virtue. What I find funny about creating art with depth is that it is not a new concept, much to the alternative. Art has always been layered full of depth. Before the invention of TV they had pictures, and paintings, and cartoons, all of which wouldn't be worth their weight in salt if they didn't have depth to hold someones attention.

Are all these things in which I have done necessary?  No they are not, but why not make things better than they can be.

Thank you for reading, I hope you have a good day.